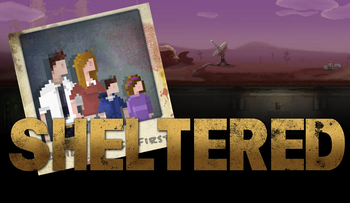 Family Comes First.
The world has been destroyed by a nuclear war. Scorched wasteland as far as the eye can see. How will you survive? What will you eat? Where will you stay to shelter yourself from the elements?
Advertisement:

Fortunately, a family of four (five if they have a pet) finds a fallout shelter, which will now be their new home. How long will they last?

That's entirely up to you.

Sheltered is a Management Game by Unicube that sees you helping said family survive for as long as they can in a post-apocalyptic Earth. You gotta help them maintain the shelter's systems and keep them stocked with food, medicine, and various other supplies.

The game was funded on Kickstarter, and released on March 15th, 2016.