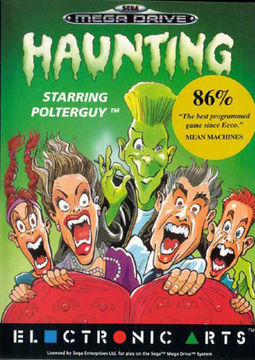 Haunting Starring Polterguy is a 1993 video game released for the Sega Mega Drive/Genesis developed by Electronic Arts (ported to Playstation Portable in 2006). In a shout-out to the haunted house genre, it gives the player the unique experience of being a poltergeist. It includes various horror themes, even some blood and gore, but always in a comedic way.

Hero Polterguy is a friendly punk teenager who was killed in an accident involving defective skateboards. These were manufactured by evil business mogul Vito Sardini and his corporation. Polterguy seeks revenge by haunting him and his family through no less than four houses. Polterguy can jump into a variety of household objects ("fright 'ems") to activate them. Whenever a member of Vito's family is around, these objects will jump scare them and finally drive them insane so they'll finally leave the house.

Polterguy can't die through normal gameplay, but he has a gauge of ectoplasm (green slime). As soon as it drops to zero, he has to go to the Underworld where he has to collect a trail of ectoplasm and avoid scary traps. This is the only area where Polterguy can lose the game. From the second house on, he'll meet also ecto monsters and the family's dog, the only being that can spot him.