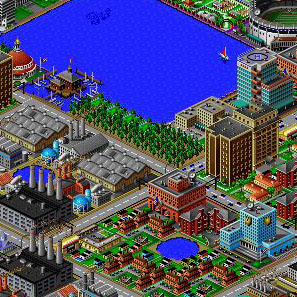 Looking down on City Name.
Advertisement:

From The Other Wiki: Isometric projection is a form of graphical projection, more specifically, a form of axonometric projection. It is a method of visually representing three-dimensional objects in two dimensions, in which the three coordinate axes appear equally foreshortened and the angles between any two of them are 120 degrees.

In layman's speak, it's a way of faking perspective by squashing the vertical axes, thus forcing perpendicular angles to look wider. Also, close up objects appear the same size as distant objects.

In the days before true 3-D graphics, isometric projection was one of the ways artists suggested depth. Developed and formalized in the 19th century for technical and architectural drawings, it remains a popular way of creating 3-D-esque graphics in video games, especially for handheld systems.

Of course, in many cases in video games, the projection is not actually isometric in the mathematical sense, because a 26.57° slope is much easier to draw on square pixels than a 30° slope.note A right angle triangle where one acute angle is 26.57° has a corresponding side whose length is exactly half of the length of the other side. But that would be nitpicking, so these games are called "isometric" anyway. The term can also refer to the vastly different Trimetric Projection (such as in Fallout and Fallout 2 or SimCity 4), where all three angles are different.

The weakness of Isometric Geometry is that the same sort of line can be either distance or height, or even both in some cases. Usually, it's easy to tell; but no proper Penrose staircase

could be built without this concept.