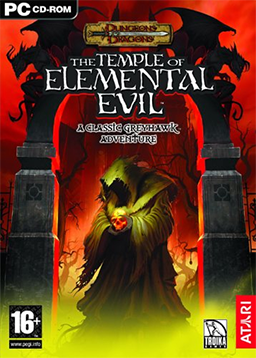 A video game adaptation of the Temple of Elemental Evil adventure module for Dungeons & Dragons. The game was developed by Troika Games and released in 2003.

This being an adaptation of the original module, the backstory of the plot veers a bit into Alternate Continuity: Troika used the description used in the original module and added the future Circle of Eight to the Battle, even going as far as having them be the only reason the Battle was won, rather than using the official post-Gygax version of events where the then-named Citadel of Eight never even participated in the Battle. Other than that, very little has changed with the overall plot when compared to the module.

Although buggy upon release (even by Troika's usual standards), the game received some praise, mainly for its relatively faithful adaption of the Dungeons & Dragons 3.5e combat rules, and has since developed a strong cult following, with fanmade patches fixing the most problematic bugs. The game is currently available on GOG right here

. There is also a total conversion mod for the game, turning it into an adaptation of the Keep on the Borderlands module.

Tropes exclusive to Troika's adaptation include: