Tabletop Game / Keep on the Borderlands 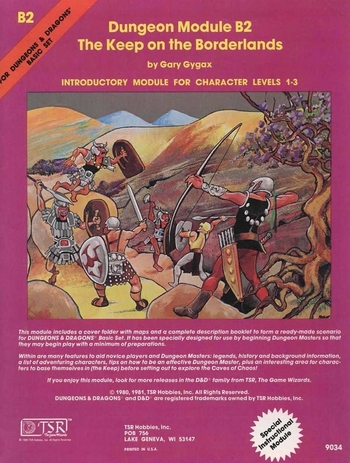 Keep on the Borderlands was an introductory module for the Red Box (Basic) version of the non-Advanced Dungeons & Dragons. As the module packaged in with the latter pressings of the Holmes Basic Set and the Red Box, it became one of the most run-through modules in D&D and one of the most popular.
Advertisement:

Set in the Known World of Mystara with the majority of the other BECMI rulebooks and adventures, the Keep was intended to provide a "home base" for beginning adventurers and provide them with numerous adventure hooks to take. The majority of the hooks involve the Caves of Chaos located not far from the Keep. Unlike many of the other popular modules, Keep on the Borderlands did not have a strong central storyline or theme: it relied instead on providing a Wide-Open Sandbox feel, allowing the characters to wander in the wilderness or find trouble in the Keep itself if the multitude of options in the Caves were not enough to keep them entertained.

Keep has been critically acclaimed in its time, named by players as one of their favorite modules and named by Dungeon Magazine as the 7th best D&D adventure of all time in a 2004 issue.

The name was reused in 2010 as part of the D&D Encounters program, this time giving the Keep the proper name of Restwell Keep and locating it in the Nentir Vale.

The Circle of Eight modding community have written a complete version of the module that can be played using their modded version of the Temple of Elemental Evil video game.

Tropes in the Original Module