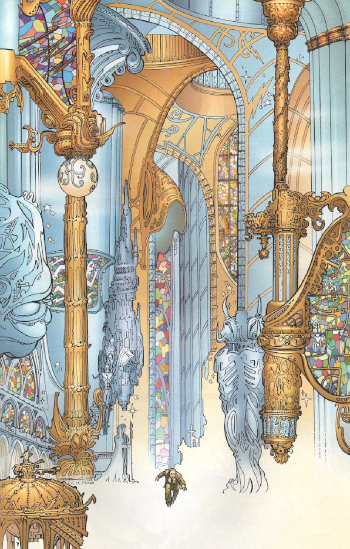 Well, he won't bump his head on the ceiling.
"Isn't space on a space station kind of at a premium? What's the big corridor down the middle of it for?"
— Unskippable, on the opening of Vanquish
Advertisement:

A tendency of Speculative Fiction pictures and art direction to have interiors much larger than would be needed in reality. As in what could be a large room becomes huge and cavernous. Sometimes the story tries to justify this, claiming the Phlebotinum needs this much empty space to work, but usually it's just because Bigger Is Better (or because the higher the ceiling, the more stuff there is to drop down on the escaping heroes when the building collapses).

Usually it's so big, that if it was done in live-action, it would be too expensive to do it as a set, or even architecturally impossible. Miniatures, matte backgrounds, or CGI would have to be used.

This can actually happen in nature, as spelunkers can attest, but even in Speculative Fiction art, this can be exaggerated.

Most video games with a Free Rotating Camera will have even supposedly humble cottages and claustrophobic caves that are actually huge so as to avoid the camera hitting things all the time. This is less prevalent in first-person views, much more so in third-person.

Tabletop games, where combat is played out on a grid, tend to feature buildings, furniture, and animals that are bigger than you'd expect, either to enable more different tactical movement options or to round up to the nearest number of units on the grid. This leads to phenomena such as chairs that are always spaced at least 5 feet apart from each other, horses that are 10 foot cubes, and simple peasant shacks that are 100 by 100 feet.

Note that "Unnecessarily" is in the title for a reason. If there is an actual practical need for it to be that large, it doesn't count. The Galactic Senate building, in Star Wars, is not an example, because it's obviously to hold all of the senators from the many sectors of the Republic, sort of like a sports stadium. Neither is the Real Life Vehicle Assembly Building in Florida. It's large enough to have clouds form inside it on humid days, but it does have the purpose of building rockets, which need that much space. More obvious examples can take place inside some kind of ship, where space will be at a premium—compare how even modern naval vessels will often feel cramped to people unused to them, for example.

Often associated with Gothic Cathedrals. May involve a Mile-Long Ship or even a Planet Spaceship.

Compare Absurdly Spacious Sewer. See also Bigger on the Inside.