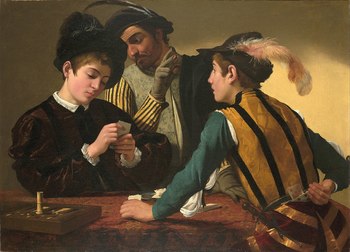 Quick hands. The prestidigitator member of a con team, who sometimes works alone. Frequently, the tricks he pulls have to do with manipulating playing cards, hence the name, but a team will sometimes call on a card sharp to make a tricky switch, "dip" a pocket, or put up a fancy misdirection.

May or may not be a Death Dealer. Compare Professional Gambler. Has a good chance of getting into a Gambling Brawl or being hit with Tar and Feathers.

"Card Shark" is a variant of the term which doesn't always imply cheating, just a penchant for playing cards. Often in the US it refers to the professional gambler who focuses on card games.