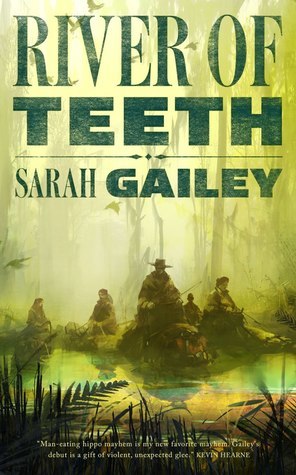 Houndstooth: It's not a caper, Hero. It's an operation. All aboveboard. All very well-planned and prepared-for.
Hero: And what's the plan?
Houndstooth: I was hoping you'd help me come up with that.
Advertisement:

River of Teeth is a novella by the American author Sarah Gailey. It was published in 2017 and is based on a true early 20th Century idea by the United States government to introduce hippopotamuses to the Louisiana marshlands to use them as livestock and alleviate meat shortages. However, the Congress never followed through with the plan.

This novella pretends that it did, though a couple decades earlier. With mixed consequences.

To make this possible the Mississippi river had to be dammed up, creating a lake known as the Harriet. But now thousands of feral hippos have made themselves at home there. Winslow Houndstooth, a reknowned hippo wrangler — better known as a hopper — is offered a lot of money to assemble a Caper Crew and solve the feral hippo problem. Though, to be fair, he takes the job in equal parts for the money and for the potential to enact revenge on the man who burned down his hippo breeding farm and now rules the casino boats which have made the Harriet a widely-known lawless place.

It's a Wild West story in which the cowboys ride hippos.

River of Teeth is followed by Taste Of Marrow.

River of Teeth provides examples of the following tropes: