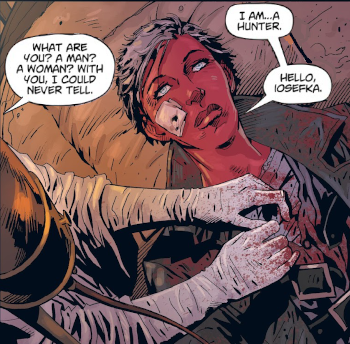 Census options in Yharnam include: Man, Woman, Beast, Pale Blood and Hunter.
"Chris is all dressed up and acting coy
Painted like a brand new Christmas toy
He's trying to figure out if he's a girl or he's a boy"
— "Bleed Like Me", Garbage
Advertisement:

Due to the blurred stereotypes and myths between transgender people and crossdressers, there are often mixed signals about characters. Transgender people don't identify as the gender they were assigned at birth. A crossdresser may be okay with — or even encourage — being referred to as the opposite sex, but they still see themselves as the gender corresponding to their biological sex.

This trope can apply for a variety of reasons: sometimes, being transgender is implied but never outright said, such as a character who's implied to have transitioned but it's never actually stated in-series or a character who displays signs of gender dysphoria without it being mentioned as such. Alternatively, a Sex Shifter, Hermaphrodite, or someone with No Biological Sex might be ambiguous if it's not clear what they identify as.

By far the most common variant is ambiguity as to whether a character is meant to be viewed as a (usually gay) man in drag or a trans woman, probably because the author doesn't realize that they aren't the same thing. This last problem is becoming a lot less common. Nowadays it's more likely because of cultural differences between the viewer and the author concerning where drag is appropriate. In Western contexts, drag is generally only worn on stage or sometimes as a disguise in comedy works. But in some cultures, it's considered perfectly acceptable for a server to wear clothing usually associated with another gender as part of a workplace uniform. While this would indeed be drag, it might confuse some viewers into thinking that the character is trans since it's not a context where they expect drag to appear. This happens for much the same reason that movies from the 30s got away with homosexuality: people don't even consider the possibility that a person could actually prefer the clothes of another gender/identify as a gender other than the one that corresponds with their sex. The other reason that there can be confusion is that many characters (and some people in real life) use drag as a way to indulge when they feel it is too dangerous to come out of the closet.

If the character's gender is not ambiguous in the story itself, but a significant portion of the fandom prefers to headcanon them as transgender, you may be looking for Trans Audience Interpretation.