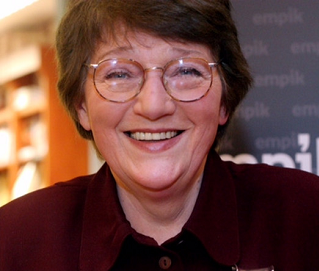 Małgorzata Musierowicz (born Barańczak on 9 January 1945) is a very successful and prolific writer for both children and adolescent girls, as well as an artist - she designs her own covers.
Advertisement:

Her best known series of novels is the Slice of Life Jeżycjada, so named from the place it's (largely) set - Jeżyce, a district of Poznań, where she used to live herself. The stories are idealistic and sweet, dealing with young girls friendships and first loves, filled with humour, optimism, romance and Latin quotations. Just the thing to curl up with in front of a fireplace - the Word of God is, she wrote the books to cheer people up.

Also the Polish translator of Beatrix Potter. Her own books have been translated into several languages, including Japanese. Won numerous awards (see webpage).

Self-declared bibliophile. Besides designing covers, she illustrates her own books as well as other writers', writes short items on various subjects and generally is a busy lady.

- Polish only, but it's mainly illustrations.

Jeżycjada consists of the following books:

Tropes found in other books by Małgorzata Musierowicz