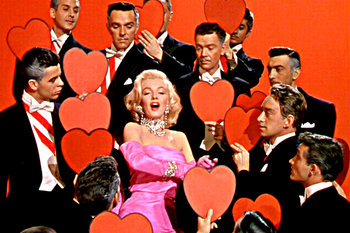 "Never shall a young man,
Thrown into despair
By those great honey-coloured
Ramparts at your ear,
Love you for yourself alone
And not your yellow hair."
— William Butler Yeats, "For Anne Gregory"
Advertisement:

When there's one character who is meant to stand out because she's the most desirable, she's pretty much always going to be a blonde. She may be Book Dumb, but she is never ditzy or foolish if intelligence is even an issue. She might be attractive in her opinion but, more likely, it's everyone else who considers her exotic. If there's a group of girls, then all the guys will want the blonde. She may be the school's Prom Queen. She is the blonde whose seemingly effortless romantic abilities we see or hear about so much that she always seems to get her man, at least at first. She may blur the line between innocent and evil in her social goals. If a man's having an affair, she's the one he's doing it with. Not that she's trying to steal him away - she wants to be happy and it's just convenient that he finds her irresistible.

Many men have the type of being attracted to many fair haired women, especially if they have long legs and big breasts, but the lovable blonde herself is the kind of person who can attract anyone she wants and she probably knows it. No matter what his type normally is, he'll fall for her.

Whether it's a single person informing us of her attractiveness or all the guys wanting her, all anyone can say about her is that she's gorgeous, sexy, or beautiful, as if that's all there is to her. She may be actively charming, athletic, rich, or even smart, but her sex appeal is considered her biggest asset. Expect her to be energetic but not necessarily to the extent of the Genki Girl. One thing's for sure: the lovable blonde is no Girl Next Door. Often times she's a foil to a dark-haired character who is less glamorous and popular.