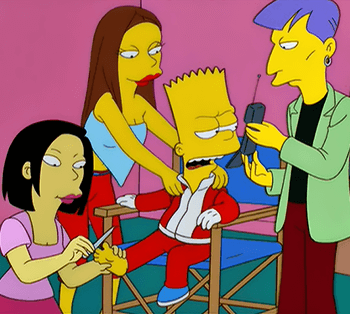 "I've got fair-weathered friends to feed."
Wesley: She still thinks she's the god-king of the universe.
Gunn: So she's like a TV star.
Wesley: No, nothing that bad.
— Angel, "Time Bomb"
Advertisement:

The Prima Donna is the Alpha Bitch of show business. Her talent and beauty are matched only by her ego, and she is prone to making infuriating demands of her producers (like demanding an Unlimited Wardrobe), and God help the poor sap in a position of servitude to her. As a performer, she will make sure everyone knows it is her show and she rules the stage with an iron fist. She never considers that she may be past her prime, or that her nasty attitude could be bringing down the morale of those around her. Often she'll be considerably meaner backstage than any of her famous roles. Expect her to put on a sweet facade for interviews and publicity appearances, but rumors of her real personality will always abound.

The Prima Donna is etymologically and stereotypically female, but men are just as likely to act this way, and the word's meaning gradually became less specific through overuse. It's Italian for "first lady" and originally referred to the lead female singer in an opera company. Evidently, enough of them embodied the traits described here that the word has gained a decidedly negative connotation. Nowadays it refers to any individual regardless of gender who is talented in their field but insufferably egotistical. The term "diva," which is Italian for "goddess" and referred to a seasoned and respected female singer, has some of the same associations with ego and entitlement, though this isn't universal, as The Diva trope is mostly framed in a positive context.

A Prima Donna actor often causes Hostility on the Set. Compare It's All About Me and Taking Advantage of Generosity. See also Prima Donna Director, who acts much the same but is running the show rather than just acting in it. Also see Bridezilla for when it's a bride — performer or not — who behaves like this during her Big Day but can be a decent person most other times.

It's worth pointing out that despite the stereotype of Broadway stars behaving this way, stage actors are possibly the performers least likely to become prima donnas. Most modern-day theatre companies have it in their contract that such behavior will quickly get an actor fired, since no amount of talent excuses disrespect toward the cast and crew. And since theater is re-created with each performance, it's relatively easy to drop an actor and replace them with an understudy the next day. In contrast, it's much harder to replace a movie's main actor in the middle of a two-month shoot.