Everyone Owns a Mac 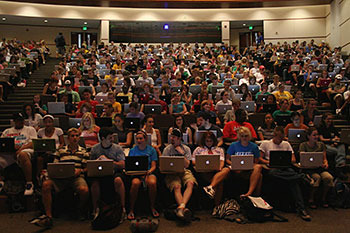 In the real world, the vast, vast majority (85% - 90%) of personal/home computers run some version of Microsoft Windows. In particular, the majority of engineers, accountants, self-employed people and teachers use Windows PCs. A fairly small number of geeks, a decently large number of data centers and supercomputer labs, and many, many scientists also run Unix-like systems, particularly Linux.note macOS is a UNIX operating system This leaves Apple Macintoshes as the minority interest mainly of a small minority of college studentsnote The Mac was specifically targeted toward higher education, academics, and a number of "creative" types — artists, writers, musicians, etc.

However... it just so happens that the latter kind of people are the ones responsible for all media. Combine that with the often-messianic zeal that Apple's hardware/software seems to generate in all who buy into it, and we have Apple computers being massively disproportionately represented.

And then we have the fact that Apple knows damn well about this situation and is more than willing to supply free hardware, though they reportedly never pay for Product Placement. While Windows holds a much larger share of the market, its share is spread among several large and many small vendors. While Microsoft has ventured into hardware with their very well-received Surface line, they hold a relatively small share of the market, focusing on premium (i.e.: direct Mac competitors) leaving mass market PCs to other manufacturers. So despite an uptick in Surface product placement, the bulk of PC representation in TV and film are generic looking laptops that have Windows replaced by a Viewer-Friendly Interface. At the same time, though, Apple doesn't allow

villains to use their products, which can result in spoilers for sufficiently observant viewers (unless directors ban iProducts from their work entirely).

It also helps that the minimalist design of most Apple products means that, not only do they not stand out in the background of a shot, but they also look pretty damn slick, too.

Note that this does not apply to iDevices, which are actually very popular in the real world. Given that in late 2012, iPads account for something like 70% of all tablet computers, they're emphatically NOT this trope — it would be more notable if someone were using a tablet that was not an iPad.

the iPhone is the leading phone model in market share in the United States with a 40% market share, but it's just a relative plurality as Samsung is not far behind with a 31% market share. Despite this, it would seem that the iPhone in Hollywood has a 90% market share, and you will be hard-pressed to see a Samsung or other Android-based phone in American media.

See also iPhony, where a parody or Expy is used instead. Americans Hate Tingle is a possible aversion of this trope.

Note that this is effectively an Enforced Trope for shows on Apple TV+, since the programs are an effective way for Apple to promote their products free of charge. Shows like Ted Lasso and The Morning Show have plenty of scenes where their characters are seen typing away on Macs and using iPhones, often with the logo visible.