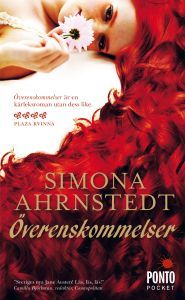 While the main theme of a Romance novel should be a love story, how two lovers will find happiness together, it's possible to cover other themes too. And that's what Swedish writer Simona Ahrnstedt did in her debut novel, Överenskommelser (first published in 2010). It's so easy to believe that rich people always have been happy. After all, don't they live in big houses, wear fine clothes, go to fancy parties and have servants to do everything for them? But reality behind the façade can be ugly, maybe even terrifying. And we only have to go back a handful of generations to end up in an era when women had much fewer rights than what men had. This is the story about how a seemingly glamourous life in the upper classes of 1880s Sweden could become a nightmare. The title of the novel can be translated as "Agreements" or "Understandings", referring to a forced arranged marriage...

Beatrice Löwenström became an orphan when she was fourteen years old, and now she's had to live with relatives in Stockholm for four long years. But it becomes increasingly difficult for her to stay with them... Uncle Wilhelm doesn't like independent women, so he does everything so that the intelligent and assertive Beatrice shall ”know her place”. And cousin Edvard admires his father's ”firm hand with women”. Aunt Harriet is ill and weak, so she can't bring joy or comfort to anyone. However, Beatrice is really fond of her cousin Sofia and their companion Mary. And one day, she meets Seth Hammerstaal, a Norwegian business man. Despite his rather humble background, he has become very rich, but many people still only see him as an irritating upstart. And even though he's had affairs with numerous women, Seth still hasn't been able to find ”the right one”. But then he suddenly meets the unconventional Beatrice, and they soon become attached to each other. But their happiness is ruined, when they learn about something terrible. Her uncle Wilhelm has already promised her off, without even asking her what she wants, to the tremendously heinous Count Rosenschiöld! Beatrice can't feel anything but repulsion about this. For not only would the age difference be enormous (he's like forty years older than her), but she knows that Rosenschiöld is only interested in her young body, and he's yet another one of these men who enjoys ruling women with iron fists. But to keep Sofia from having to marry him instead, Beatrice forces herself to agree to this betrothal. But the feelings between her and Seth are just as strong as they ever were and thus begins a hard time for them both. Will they ever get more than short moments of happiness together?