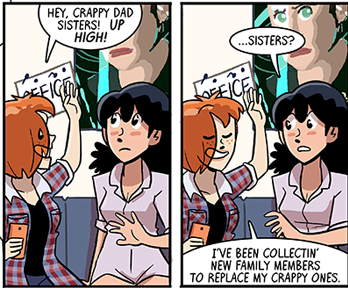 Becky has got the hang of the trope.
"God gives us relatives; thank God, we can choose our friends."
— attrib. Addison Mizner or Ethel Watts Mumford
Advertisement:

A character in some work is generally shown positively; they have friends, with whom they are in varying degrees funny, loyal, generous, or just nice. But then, one of their close blood relatives shows up — probably a sibling or parent. And suddenly we see a different side to the character; snappish, or abrasive, or vain, or painfully unhappy, or downright hateful. Their friends may well be puzzled.

Are they some kind of Jekyll & Hyde? Not really. They're just at their best with people they choose to hang out with; having been forced into close proximity with these other people for years, without being asked, has created issues. This was probably a Formerly Friendly Family, but that depends on the specifics of their story. The mere fact that they share genes with those other people doesn't remove the problem. Like most real people, they have good and bad personality traits, and their difficult family relationships bring out the bad ones. Unfortunately, while they could simply avoid any social acquaintances who annoyed them this much, nobody can change who they are related to by blood.

This is often Played for Laughs in an episodic comedy when some broadly sympathetic character gets a visit from family and suffers intense temporary stress or turns into a monster for that one episode. In such cases, the problem usually lies with the visiting family member, who is shown to be every bit as bad as the regular character thinks, justifying the negativity; when the visitor leaves, everyone sighs with relief and the status quo is restored. However, this isn't guaranteed; some or all of the fault may turn out to lie with the regular character, whose bad side is thereby revealed, or who has to learn a lesson or resolve their issues at some point. This may happen when the visitor admits to some past error that left the regular disproportionately embittered.

Alternatively, the family may be recurring background characters, in which case, the problem probably does lie largely or entirely with them, or the lead character will end up looking unsympathetic. They may be anything from minor nuisances to recurring antagonists to pure evil. If they're all evil, this makes the foreground character a White Sheep; if they're not that bad really, the hostility becomes a significant character flaw — which may just be a way for the author to save the foreground character from being too much of a paragon. Whether relatives-by-marriage come within the scope of this trope may depend partly on whether the character considers the ties of blood to extend that far, but it can be as difficult to avoid Obnoxious In-Laws as to avoid blood relatives if your spouse feels obliged to be loyal to them and you want your marriage to survive.

As many people will probably admit, there's a lot of Truth in Television in this; some quite nice people are fully capable of squabbling harshly with some of their relatives, for good or bad reasons. The saying "We Choose Our Friends, God Gives Us Our Relations," or some variant of that, is a rueful acknowledgement of this.

This trope contrasts with Thicker Than Water but is not the oppositenote In fact, the oft-cited 'blood is thicker than water' quote comes from a longer quote - 'The blood of the covenant is thicker than the water of the womb'. Someone can dislike their family quite intently, but still feel that blood relatives have an inescapable claim to some kind of loyalty, especially if they were Formerly Friendly. Indeed, blood being Thicker Than Water may be the reason why they still associate with these family members at all, despite all the stress, anger, and danger of looking bad. Inversions of the trope are not particularly noteworthy; lots of people, in reality and in fiction, are cold and reserved with most others, but show affection to their families.

Sibling Rivalry may be the original source of the conflict (depending on the actual relationships involved, of course). People mostly grow out of those sorts of problems, though, or try to avoid looking too bad as a result; this trope can kick in when a good person lets a family conflict turn toxic. Abusive Parents can of course be an excellent reason for not getting on with one's family; merely Amazingly Embarrassing Parents can also trigger the trope if they don't let up on the habit when their kids leave home. The Glorious War of Sisterly Rivalry or a Cain and Abel situation can generate this trope if either or both of the siblings look nicer when out with friends and not engaged in the conflict. If the problem is a seriously Dysfunctional Family, an Archnemesis Dad, or an Evil Matriarch, the character may get special credit for getting out of that mess. Conversely, a dark version may arise when an Antagonistic Offspring finds allies.

Alternative Title(s): We Choose Our Friends God Gives Us Our Relations