Literature / Reign of the Seven Spellblades 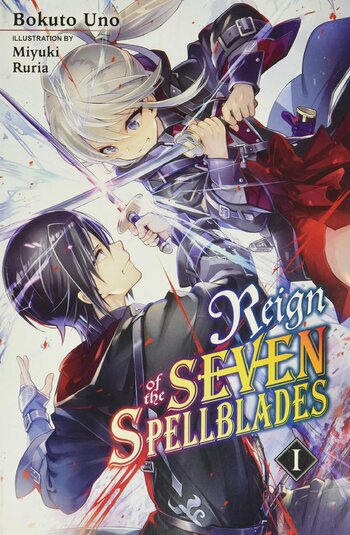 Oliver Horn: Don't cry.
Nanao Hibiya: Thank you.
Springtime at Kimberly Magic Academy brings a new batch of first-year students, all bright-eyed and bushy-tailed as they begin their journey to become full-fledged mages. Among these newcomers are Oliver Horn, a studious boy equally skilled with the wand and the blade, and Nanao Hibiya, a strong-willed samurai girl from the distant nation of Yamatsu. The wheels of fate bring these two souls together at Kimberly, where they become both comrades and rivals in equal measure. However, lurking within the academy's halls are countless dangers and dark secrets guaranteed to threaten not only their friendship—but their very lives...
Advertisement:

Reign of the Seven Spellblades (七つの魔剣が支配する Nanatsu no Maken ga Shihai Suru, "Rule of the Seven Magic Swords") is a Dark Fantasy light novel series written by Bokuto Uno (author of Alderamin on the Sky) with illustrations by Ruria Miyuki, published under Kadokawa's Dengeki Bunko imprint beginning in September 2018. It has a manga adaptation by Sakae Esuno (creator of Future Diary), which began its run in 2019. Both were licensed by Yen Press for English publication beginning in 2021. It has an upcoming anime adaptation.