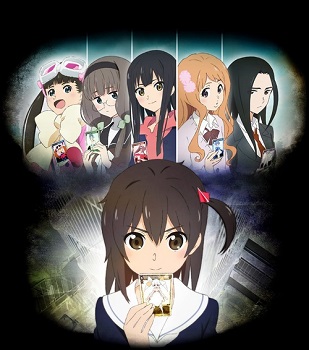 An anime by JC Staff about girls who fight battles to have their wish granted, using special cards that have wills of their own. Based on the card game WIXOSS by Takara Tomy.

The first season aired during the Spring 2014 Anime season. A second season, named Selector Spread Wixoss, aired during Autumn of the same year.

Spin-Offs include the mangas Peeping Analyze, Re/verse, and Selector Stirred Wixoss, the idol card fighting AU Diva A Live, and the mobile game Selector Battle with Wixoss. There are also several light novels for WIXOSS as well that take place in a an Alternate Universe.

A sequel movie titled Selector Destructed Wixoss premiered on February 13, 2016. A new anime titled Lostorage Incited WIXOSS followed, premiering on October 7, 2016. A sequel of Lostorage, titled Lostorage Conflated WIXOSS premiered in April 7, 2018 and it brigs together characters from both series.