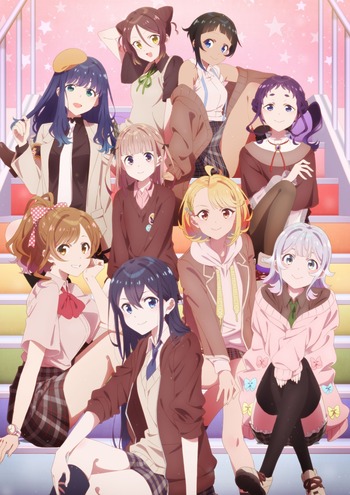 SELECTION PROJECT is an Anime First original series produced by Dogakobo. It began airing during the Fall Anime Season on October 2021.

Held every summer of every year, "SELECTION PROJECT" is a nationwide idol reality TV show that has aspiring and talented young girls from all over Japan compete against each other to come out on top and become the next big idol. This show was also the gateway of the legendary idol, Akari Amasawa, a young star who won the inaugural season, and lost her life due to a tragic accident three years prior.

Enter Suzune Miyama, a young girl who dreams of becoming an idol after being inspired by none other than Akari Amasawa herself. Having been bedridden and hospitalized since childhood due to health problems, Suzune often listened to Akari's songs to give her the courage to smile in spite of her own difficulties, encouraging Suzune to follow her idol so she too can inspire others the same way Akari did to her before.

Now that she's participating in the seventh SELECTION PROJECT on the last summer of her final year in junior high, will Suzune be able to fulfill her dreams and come out on top?