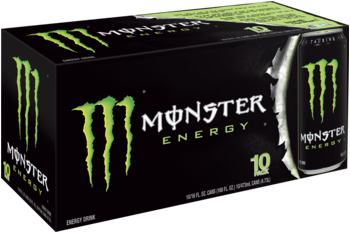 Not a half pack of Monster, a COMPLETE pack of Monster.
"I met him, fifteen years ago; I was told there was nothing left; no reason, no conscience, no understanding; and even the most rudimentary sense of life or death, of good or evil, right or wrong. I met this six-year-old child, with this blank, pale, emotionless face, and the blackest eyes...the devil's eyes. I spent eight years trying to reach him, and then another seven trying to keep him locked up because I realized that what was living behind that boy's eyes was purely and simply...evil."
— Dr. Sam Loomis, about Michael Myers, Halloween (1978)
Advertisement:

The Complete Monster can be recognized by these signs:

Characters calling out other characters for their crimes In-Universe is You Monster!. Due to misuse, examples of this trope go through the Complete Monster clean-up thread

Professor Zundapp torturing Rod Redline by putting Allinol into his fuel and increasing the EMP, killing him after interrogating him.

Professor Zundapp torturing Rod Redline by putting Allinol into his fuel and increasing the EMP, killing him after interrogating him.