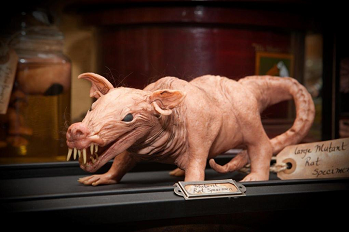 Used with permission.
What was wrong with its fur?
The creature had none. Cat-shaped, it was as hairless as a newborn kitten. At first, wildly, Pouncequick thought it must have been some kind of monstrous infant— its eyes were sealed shut, as were eyes of the Folk when they emerged from the womb. The thing turned toward Pouncequick, huge nostrils dilating. Then, in a high, whispering voice, it spoke.
— Tailchaser's Song
Advertisement:

There can be something uncanny about an animal that probably should be hairy but isn't. Mammals are generally supposed to have fur, but for whatever reason this animal does not.

Some species of mammals, such as cetaceans, pangolins, walruses, rhinos (except for the extinct wooly rhinos), elephants, hippos, manatees, armadillos, swine, and humans have little or no fur or hair by default.note Although humans do tend to have a lot of hair on their heads. Mammoths, extinct relatives of elephants, had more fur. Also, some swine have more fur. In real life, many domestic animals are bred not to have fur. This is usually either for aesthetic value or because the animal lives in a warm-weather environment. When it comes to pets (except pet pigs), hairless breeds tend to cost more and are usually more expensive to maintain due to their special needs.

Some wild mammals, like foxes and coyotes can be hairless due to having mange. Chimps can also sometimes be hairless.

Featherless birds are often played to be creepy as well, in fact, more so than hairless mammals. We typically think that vultures and turkeys appear creepy because their heads and necks are featherless. This trope's prevalence is why songbird chicks and parrot chicks are usually portrayed as (inaccurately) having downy feathers like chicken chicks, penguin chicks, and ducklings.

This trope is largely why the Sphynx and other hairless cat breeds are stereotyped as villainous and evil in fiction. Because they're so expensive to buy, they also get hit with a bunch of negative "rich people" stereotypes.

Compare to Bald of Evil for a human equivalent. Compare and contrast Furry Baldness for mostly furless animals that appear to be bald or have balding crowns, whether they are creepy or not. Contrast Goofy Feathered Dinosaur, when giving a featherless animal fluffy plumage makes it seem less scary.