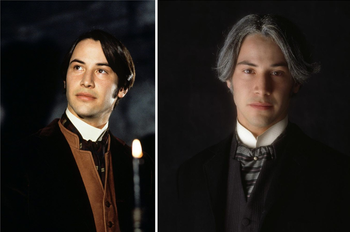 Jonathan Harker, before and after a stay at the Castle of Dracula.
"They used to call me 'Red', but three years of malnutrition will do a number on your hair color."
— Ian Starshine, The Order of the Stick
Advertisement:

It's a widespread belief that stress causes hair to turn gray and science is still working on a verdict. Fiction, meanwhile, asserts that as stress comes in many forms, some are more effective than others at turning hair white.

One of the most effective ways to turn a character's hair completely white would be the stress of prolonged illness. There may be some Truth in Television to this, but typically it's taken to extremes. In some cases, this trope is used to justify the white-hair part of White Hair, Black Heart if he happens to also be an ill guy.

Note that this trope also applies to people whose hair has turned white due to prolonged stresses similar to diseases, such as being a prisoner of war. If a character's hair suddenly changes color forever due to supernatural causes, it's Locked into Strangeness. If this is a direct (often temporary) effect of supernatural influence, it's Power Dyes Your Hair. Also has no relation (usually) to Brain Bleach.

A Sub-Trope of Prematurely Grey-Haired. Compare Baldness Means Sickness, for when a person who's ill or stressed loses their hair instead of graying.