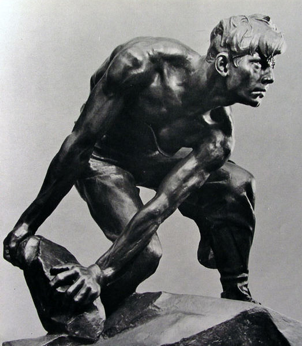 ◊
Even when all you have is a stone, with the will to resist, there is hope.
Loki: Kneel before me. I said... KNEEL! [people in the crowd kneel] Is this not simpler? Is this not your natural state? It's the unspoken truth of humanity that you crave subjugation ... In the end, you will always kneel.
Old German Man: [slowly stands up] Not to men like you.
Loki: There are no men like me.
Old German Man: There are always men like you.
— The Avengers
Advertisement:

So the villain is going on an evil speech about how now everyone must despair and obey or die... Only to get a rock to the head from a Muggle or Innocent Bystander. Rather than be paralyzed with fear, the meekest make a very brave, but mostly harmlessnote despite the fact that in Real Life, getting hit by a good-sized rock can be legitimately dangerous gesture of defiance against a dangerous foe whom they have every reason not to piss off. For extra trope points, it'll be a child, old person, or someone who is completely unintimidating. For double bonus points, it will be someone previously shown to dislike the hero or badmouth them.

The symbolism here is pretty direct: even when in the face of overwhelming opposition and defeat, people are still capable of bravery and dignity.

Despite the trope name stones aren't always used, sometimes it's trash or even Produce Pelting. If even that is hard to come by, the (at this point) Heroic Bystander may just use a well-timed Shut Up, Hannibal!, saying that they reject their rule, believe in the hero, and that even The Hero's defeat will only embolden them to fight for themselves. This may lead to the rock thrower getting killed, a pro-hero riot starting, the villain getting distracted (and the hero taking advantage) or the release of the hero to finish the battle. In some cases, the civilian has no rock and instead uses trash, or does something equally impressive like standing during a Kneel Before Zod exchange.

See also Spirit Bomb, Did You Just Flip Off Cthulhu?, Least Is First. Boulder Bludgeon is when the character actively uses rocks as a weapon.