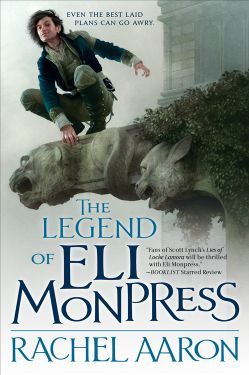 "First rule of dungeons," he said with a wry grin, "don't pin all your hopes on a gullible door."

The Spirit Thief is the first of a series of books by Rachel Aaron detailing the exploits of one Eli Monpress, a wizard and a Gentleman Thief, as well as his companions, aspiring World's Best Warrior Josef and demonseed girl Nico. In the world where every living thing has a sentient spirit, but only the wizards can hear them, Eli is a charmer extraordinaire, as proven right at the start by when he escapes from a prison by convincing the door to free itself from the tyranny of nails.

Eli has a goal, and that goal is to have a bounty on his head worth one million standards. To this end, he and his companions kidnap the king of Mellinor, a land notorious for their dislike of wizards, and ransom him for a modest sum of cash, plus a truly huge pledge to his bounty. However, it turns out that the king has a long-lost brother who is less than eager to see him returned to take the throne, and a Spiritualist from the Spirit Court has been dispatched to apprehend Eli before he further besmirches the reputation of wizards. And that's just the first book. Soon, Eli's, Josef's and Nico's pasts start catching up with them, and they become embroiled in a conflict of ridiculous proportions...

The series is composed of five books: The Spirit Thief, The Spirit Rebellion, The Spirit Eater, The Spirit War and Spirit's End. The first three have been published in the omnibus The Legend of Eli Monpress, and the last two - The Revenge of Eli Monpress. There is also a short story titled Spirit's Oath centering around an adventure of Miranda's before the series starts.