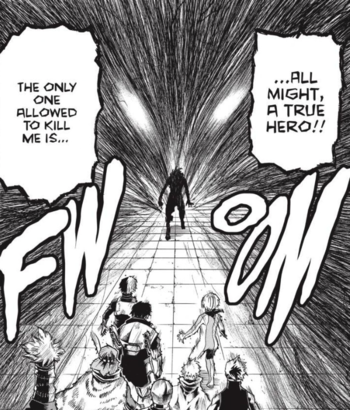 Worf: He decided to kill me while I was looking him right in the eyes, and I never saw it. But Kurn did, and he was three meters away.
Jadzia Dax: Worf, I don't think you can tell someone's going to kill you by looking at them.
Worf: A Klingon can. It is an instinct. The ability to look someone in the eyes and see the decision to kill.
— Star Trek: Deep Space Nine, "Sons of Mogh"
Advertisement:

Particularly common in Eastern works is the idea that when someone intends to inflict pain or death, their "Killing Intent" can be felt as a slight pressure or chill, even to people unaware of their presence. The effect is amplified if you look into their eyes, or if they want to hurt you in particular. Trained and vigilant warriors generally radiate low levels of Killing Intent at all times, and anyone who constantly radiates high levels of Killing Intent is either evil or obsessed with combat (and may feel kinship towards other people who possess it). There's generally a noticeable difference between "hot-blooded" and "cold-blooded" Killing Intent too. Sometimes this is considered a form of Ki, or has an effect on Ki.

While most people can only detect Killing Intent subconsciously, people who have enough combat experience (or are just perceptive) can notice it so well that it borders on Spider-Sense or Detect Evil. Likewise, some particularly vicious characters hone their Killing Intent to the point where it can leave people nearby paralysed with fear or even inflict hallucinations. In either case this will be treated as a mundane skill and not a supernatural ability, and can easily show up without comment in works which don't otherwise have any fantastic elements. Some people will even tell you it's possible in Real Life.note Sometimes adopting the less mystical explanation that it's really detecting slight differences in air pressure, temperature, smell and so on.

While having some degree of Killing Intent is normally required to fight effectively, sometimes a character will be able to attack without exuding any Killing Intent at all (through Lack of Empathy, controlling their emotions or even spacing out while fighting), making them an unpredictable combatant or even a Hero Killer. A lack of Killing Intent where it would usually be expected may also indicate a character is holding back or merely feigning aggression.

In some works Killing Intent can be used as a rough way to measure Power Levels, as someone with sufficient willpower to resist an enemy's Killing Intent will necessarily be at least as strong as them.

Since it's hard to depict a sixth sense through a visual medium, Killing Intent is often represented in Anime and Manga by Art Shift towards a more serious style, or even a Battle Aura (the metaphorical version), though this has become less common over time. When Killing Intent is considered a form of (or augments) Ki, it can be represented by a non-metaphorical aura.

The Japanese term for this is sakki (殺気note The individual kanji are pronounced satsu and ki, respectively, but due to Japanese grammar rules, the -tsu in the former is dropped and the consonant in ki is geminated

, turning it into sa- + -kki.), which is primarily used by practitioners of Ninjutsu; "Killing Intent" is the most literal translation, with "Bloodlust" as a close second. The Chinese equivalent is sha qi, or saat hei in Cantonese (殺氣).

Compare Detect Evil and Allergic to Evil, which can overlap with this trope if a character's sensitivity to Killing Intent is enhanced by supernatural means. Can be used as a justification for Spider-Sense, The Force Is Strong with This One, and Kung-Fu Clairvoyance. See also Awesomeness Is a Force, Death Glare, Ki Manipulation and Magical Sensory Effect.