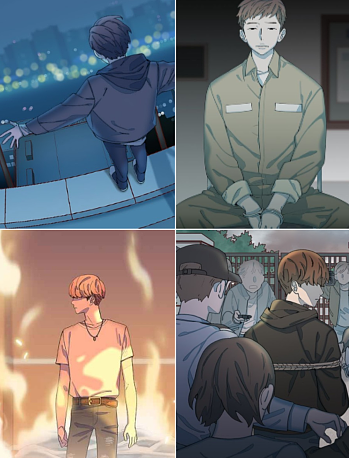 Suicidal or taken to jail, they all need therapy.
Advertisement:

An easy way to crank up drama is to supply everyone with a tragic past, a fucked up family history, other significant issues (physical, psychological, etc.) or some combination of the three. When Dysfunction Junction comes into play, good parents can be as common as penguins in the Sahara, instead turning out to be neglectful, smothering, unfeeling, abusive, misguided or dead. And let's not even get into the rest of the family.

The resulting prevalence of personal trauma often stretches suspension of disbelief and is a leading cause of Cerebus Syndrome. If done poorly, this is a one-way ticket to Wangst territory, and as so many attempt to smother the series with dysfunction, Deus Angst Machina is a frequent result. If done well, you get a large number of interesting, sympathetic, flawed characters, and their interactions with each other gradually reveal the multiple sides to each of them. More realistic (i.e. not Flanderized) portrayals of this trope can even help the audience understand and cope with their own dysfunctional lives, especially with regards to issues that are typically glossed over in mainstream society.

This trope often goes hand in hand with There Are No Therapists, Trauma Conga Line and dramatic Crapsack Worlds. Big, Screwed-Up Family can be a justification for this trope. When all or nearly all involved parties are insane, you have a Cast Full of Crazy. Royal families are particularly prone to this, as are cops and detectives. The Dysfunction Junction is the natural habitat of the Jerkass Woobie.