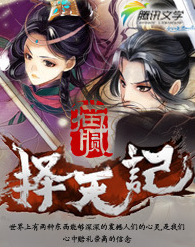 Make Your Decision. Change Your Fate.
''To pick is to choose. This is a story about choices. Three thousand worlds full of gods and demons, with a scroll in hand you are able to control the entire universe...
At the beginning of time, a mystical meteor came crashing down from outer space and scattered all over the world. A piece of it landed in the Eastern Continent. There were mysterious totems carved upon the meteor, and people gathered around it wanting to discover its usage. They discovered the Way, and established The Tradition.
Advertisement:
Several thousand years later, the fourteen years old orphan Chen Chang Shang left his master to cure his illness and change his fate. He brought a piece of marriage vow with him to the capital, thus began the journey of a rising hero.''

A golden dragon descends from the heavens to consume a most delicious smelling infant floating in a basket, before being driven off by Daoist Ji, a wise healer and hermit. Daoist Ji adopts the baby boy as his disciple, naming him Chen Changsheng.

Ten years later (fourteen in the TV adaptation), Chen is gathering herbs on the mountainside when he begins exuding a strange odor that causes all the wildlife to raise a ruckus, and makes his brother disciple's mouth water. Daoist Ji diagnoses these symptoms as a condition causing certain death when Chen turns twenty, something no medicine can help with. His only options for survival are to either change his fate (supposed to be impossible—and while at least three people have done it anyways, they aren't around to explain how) or to cultivate through at least five stages of ascending enlightenment and become a divine being beyond both death and fate (at least theoretically possible, but the wisest and purest take centuries to achieve this, and his qi meridians are too messed up to make this realistic) within ten years (five years in the TV adaptation).

So Chen sets out to do both: attempting to purify himself towards divinity while pursuing knowledge on how to change fate.

The story has also been adapted into a live-action TV show, called Fighter of the Destiny. There is no complete translation available, but you can read up to chapter 982 in English here

. Currently being made into an ebook series

Way of Choices contains examples of: