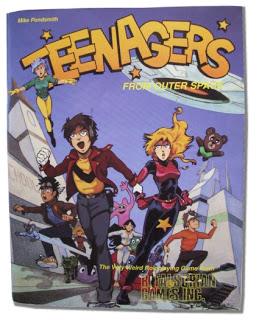 Not to be confused with the 1959 sci-fi movie of the same name (as seen on Mystery Science Theater 3000), Teenagers From Outer Space is a wacky, rules-light, Animesque RPG from R. Talsorian Games.

The concept of the game revolves around the aftermath of mankind's first contact with space aliens. In this case, since all the aliens come from One World Orders, they quickly become fascinated with Earth's cultural diversity. So much so, that sending your kids to high school on Earth becomes the next big thing. Naturally, with all those teenage aliens running around mingling with the locals and getting into Zany Schemes, Hilarity Ensues.

The game was based on comedy anime (particularly Urusei Yatsura), with maybe a dash of western shows like Galaxy High, but was originally released in the '80s when anime was still a pretty niche thing. So, it was written as a general comedic sci-fi RPG. After anime started becoming mainstream in the mid-90's, the game was reworked to make the anime influences the main selling point.

The game came in three editions: 1987, 1989, and 1997. The only difference is each successive version added another alien powers table, and different sample characters in each edition (with a lot of overlap)

The books also come with a list of adventure seeds called "Episodes", many of them based on the plots of episodes of real comedy anime.