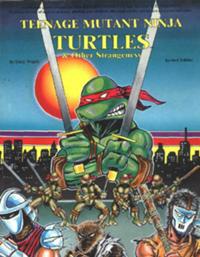 The players get the opportunity to play as a variety of mutated animals, having the ability to chose the species, mutations and special abilities that the character would receive. Possible characters range from tiny psychic bunnies to enormous anthropomorphic crocodiles to humanoids with almost no trace of their animal species.

The game series dropped in popularity and sales once the 1987 cartoon and live-action films rolled out, which made (from the publishers' words) "the Turtles seem so childish that no self-respecting teenager, even if he thought the Turtles were cool, or thought the Ninja Turtle game was cool, was going to be caught dead playing it." By 2000, Palladium Books did not renew the license, because of license costs and the perception of the TMNT.

The supplement books to the core book are as follows:

After the Bomb series: