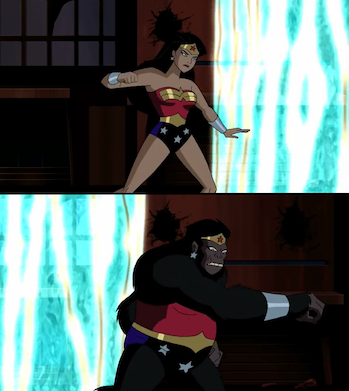 "Great Hera, someone made a monkey out of me!"
"'It appears to be some kind of Spielberg Ray,' said one watcher. 'All our guns have been turned into walkie-talkies.'"
— Plan 7 of 9 from Outer Space (referencing the alternate cut of E.T. the Extra-Terrestrial)
Advertisement:

Any Phlebotinum that transforms someone(s) into something weird, usually by shooting them with a ray. It's often a machine, produced by a Mad Scientist, but Green Rocks are also common. At the end of the episode the same Phlebotinum is used to reverse the effects, or it simply wears off (for example, the puppetising spell in Angel).

Occasionally, it may be used in the first episode to set up the premise of the series, in which case, it doesn't wear off and/or can't be found for reversion.

A Sub-Trope of Ray Gun. May be a type of Projectile Spell.