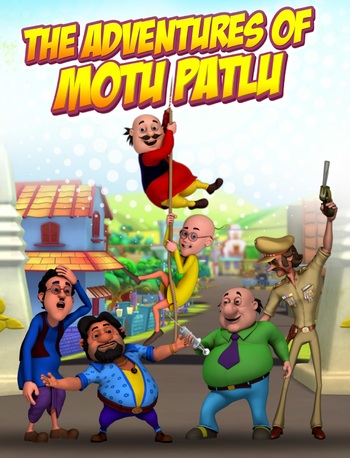 The title means "fat guy, thin guy".note From left to right: Ghasitaram, John the Don, Motu (above) and Patlu (below), Dr. Jhatka, and Inspector Chingam.
Advertisement:

Motu Patlu, also known as The Adventures of Motu Patlu, is an Indian All-CGI Cartoon that is an Animated Adaptation of the comic from the Lotpot magazine. The original series had Limited Animation, but Cosmos-Maya rebooted it in 2012 with updated graphics. Most tropes on this page are about the reboot due to it being far more popular than the original.

In India, Motu Patlu airs on Nickelodeon India and Rishtey. It is one of the most popular children's shows there; it has had several television movies along with a theatrical film titled Motu Patlu: King of Kings. Outside of India, Motu Patlu can be watched mostlynote Motu Patlu received English, Spanish, and French subtitles up until early 2017 with English subtitles on the official YouTube channel Wow Kidz

and an English dub can be watched on this channel