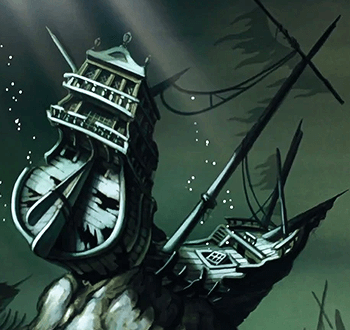 So you're looking for a lost treasure ship on the bottom of the ocean. Good thing that the ocean is a perfect preservative. Oh, it might have some barnacles and coral here and there, maybe some parts have collapsed, but that may have happened when it was sunk. Heck, it probably still has tattered sails! It'll be sitting slightly to one side, but still mostly upright.

Not so in the real world. In the real world, water, particularly salt water, and especially warm salt water, as seen in most pirate-frequented areas, wreaks havoc on anything immersed in it for too long. Just look at the continued decay of the RMS Titanic or ships sunk during World War II. A wooden ship in salt water would be shipworm

bait in no time flat.

Often an excuse for a Gangplank Galleon; ubiquitous in the Derelict Graveyard. Can also be a Ghost Ship or an example of Ragnarök Proofing.