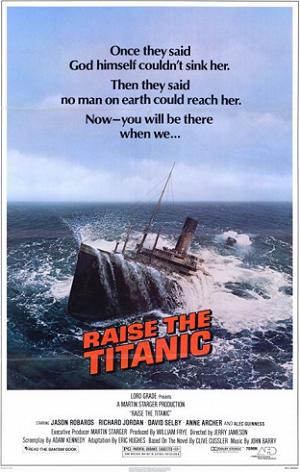 "It would have been cheaper to lower the Atlantic."
— Lew Grade, producer
Advertisement:

Raise the Titanic is a 1980 adventure film based on Clive Cussler's 1976 novel of the same name, directed by Jerry Jameson and starring Jason Robards, Richard Jordan, David Selby, Anne Archer and Alec Guinness.

The plot centres around a plan to raise the ill-fated liner from the bottom of the Atlantic in order to recover a rare mineral thought to be on board.

Raise the Titanic proves examples of the following tropes: