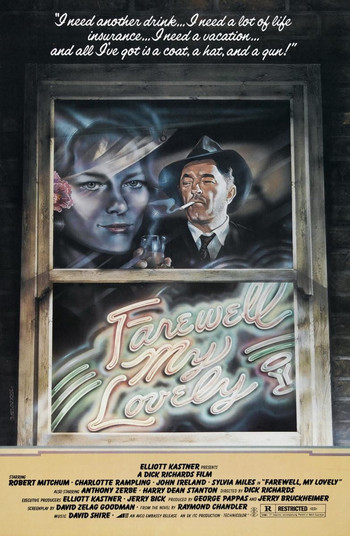 Philip Marlowe (Robert Mitchum) is out tracking down a runaway daughter when he encounters an ex-con named Moose Malloy (Jack O'Halloran). Malloy, who has just gotten out of jail after serving seven years for bank robbery, hires Marlowe to find his missing girlfriend, Velma. Malloy hasn't even heard from Velma in six years, and Marlowe is reluctant to take the case, but Malloy is a mountain of a man (he makes Robert Mitchum look small!), and by sheer will makes Marlowe take the case.

Meanwhile, Marlowe also winds up investigating the murder of one of his clients, a guy named Marriott, who was involved with a missing jade necklace. Of course, both cases turn out to be connected, and Marlowe gets caught up in something far bigger than he imagined.

Charlotte Rampling plays Velma/Helen, the mysterious Femme Fatale. Harry Dean Stanton is Detective Rolfe of the LAPD. Sylvester Stallone appears in a bit part, the year before he hit it big with Rocky. This film is also the very first producing credit for Jerry Bruckheimer.