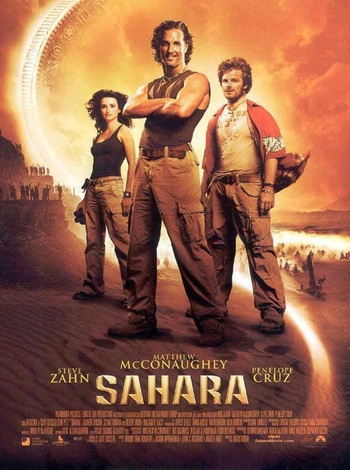 Al Giordino: Well, we're in the desert, looking for the source of a river pollutant, using as our map a cave drawing of a Civil War gunship, which is also in the desert. So I was just wondering when we're gonna have to sit down and re-evaluate our decision-making paradigm?
Dirk Pitt: I don't know — it seems to be working so far.
Advertisement:

Sahara is a 2005 action-adventure film directed by Breck Eisner, loosely adapted from Clive Cussler's 1992 novel of the same name.

Matthew McConaughey stars as Adventure Archaeologist Dirk Pitt. While engaged in a deep-sea salvage off the coast of Nigeria with his partner Al Giordino (Steve Zahn), Dirk discovers evidence that a lost Civil War ironclad may have managed to cross the Atlantic and wind up in Western Africa. Simultaneously, he saves the life of a WHO doctor (Penélope Cruz), who is investigating the source of a strange disease. Together they travel up the Niger River, searching for the missing ship and the toxins causing the disease, while evading the forces of General Kazim (Lennie James), who rules over the region and may have something to do with the plague.