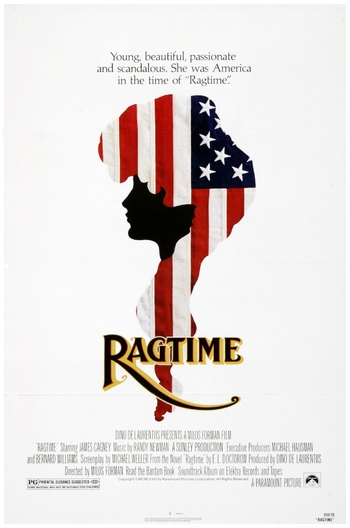 "In 1902 Father built a house at the crest of the Broadview Avenue hill in New Rochelle, New York, and it seemed, for some years thereafter, that all the family's days would be warm and fair."
— "Prologue: Ragtime" (from The Musical)
Advertisement:

Ragtime is a 1975 historical fiction novel by E. L. Doctorow. It takes place in and around New York City between 1900 and 1917, and follows three fictional American families whose lives intersect with those of various major historical figures from the time, such as Evelyn Nesbit, Harry Houdini, Emma Goldman, Booker T. Washington, Henry Ford and J.P. Morgan. The three families are: an upper-class WASP family from New Rochelle, consisting of a grandfather, a father, a mother, their son, and the mother's younger brother; a talented young black pianist Coalhouse Walker Jr., his girlfriend Sarah, and their son; and a Jewish Eastern European immigrant and his young daughter. It is written with a ridiculous amount of detail, approaching Tolkienesque levels.

In 1981 it was adapted into a film version, written by Michael Weller and Bo Goldman and directed by Miloš Forman. The film, which starred James Cagney, Howard E. Rollins Jr., Brad Dourif, Elizabeth McGovern, Mandy Patinkin, and Mary Steenburgen (among others), was nominated for eight Academy Awards.

It was further adapted into a musical with a book by Terrence McNally, lyrics by Lynn Ahrens and music by Stephen Flaherty. The original cast included Brian Stokes Mitchell, Audra McDonald and Marin Mazzie. It was nominated for twelve Tony awards, and won four: Best Featured Actress (McDonald), Original Score, Book, and Orchestrations. A revival of the musical opened on Broadway on November 15, 2009 after transferring from a successful regional production located in the John F. Kennedy Center for the Performing Arts. It closed January 15, 2010.