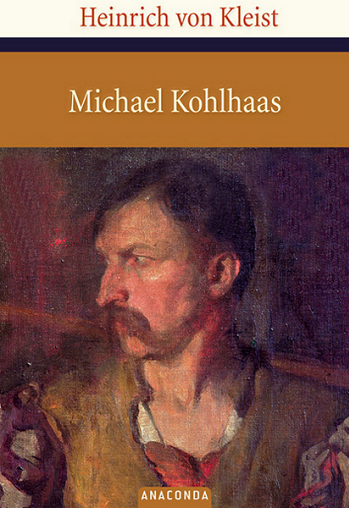 A novella written by Heinrich von Kleist in 1811.

Michael Kohlhaas is a horse-dealer in mid-sixteenth century Germany, the time of Martin Luther. His neighbor the Junkernote Squire von Tronka shamelessly "impounds" two of his horses and works them half to death. Kohlhaas files a complaint in court; the Junker has friends in high places and gets the case dismissed. Kohlhaas thinks he'll have to take drastic measures to get a hearing. His wife Lisbeth, hoping to avert this, takes a petition to the Elector of Saxony. She is shoved around by the Elector's servants and dies. She, dying, points to a verse in the Bible: "Forgive thine enemies; do good to them that hate thee." — Kohlhaas: "May God never forgive me as I forgive the Junker."

Kohlhaas declares war (literally) on the state of Saxony. He maintains that since the states won't give him justice in their courts, they've excluded him from citizenship and therefore he can declare war on them. He gathers a band of followers and begins burning villages and towns, saying that he'll stop just as soon as he gets a day in court. What he wants is justice, he doesn't think of it as revenge. His wife's death fuels his rage and removes his last hesitation, but only to carry out the plan he'd already made; he doesn't even increase his demands. What he asks for, in the end as at the beginning, is exactly what's due to him: his horses, in their original health, no more, no less (with the additional poetic justice that the Junker must care for the horses with his own hands until they're recovered).

But this is just the first half of the story. The political ramifications expand to the rest of Germany, and a mysterious Gypsy woman offers Kohlhaas something that might save his life: a paper on which a prophecy about the Elector of Saxony is written.

The story is generally regarded as a classic in German and European Literature. Franz Kafka was a major fan of Kleist and often read out "Michael Kohlhaas" to his friends, calling it one of his favorite stories.