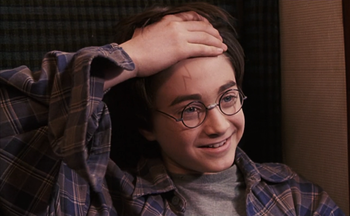 The physical version of Something Only They Would Say, where a character is identified by an unusual body deformity or trait, like a mole or birthmark. Bonus points if the mark is in a place that would be embarrassing/forbidden to show in public.

The barcode (which may be a tattoo but probably isn't) is often used as a sci-fi variation on the birthmark.