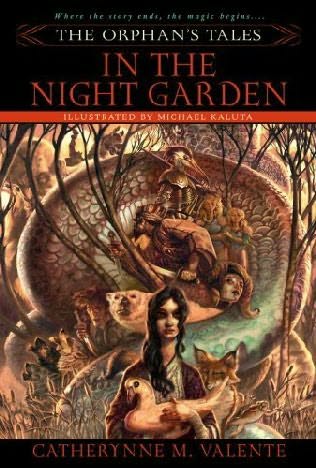 A mysterious orphaned girl lives by herself on the garden of a Middle Eastern-esque palace, shunned by the nobility and considered a witch due to the black birthmarks around her eyes. A boy, son of the Sultan, manages to find out her secret: in the marks are written stories, which the girl agrees to narrate. Thus begins the Framing Device to The Orphan's Tales, a fantasy book in two volumes (In the Night Garden and The Cities of Coin and Spice) by Catherynne M. Valente. What follows is a complex plot that, heavily inspired by several fairy tales and the Arabian Nights, includes most of the tropes related to those stories and subverts, deconstructs or lampshades most of them along the way.

The Orphan's Tales provides examples of: