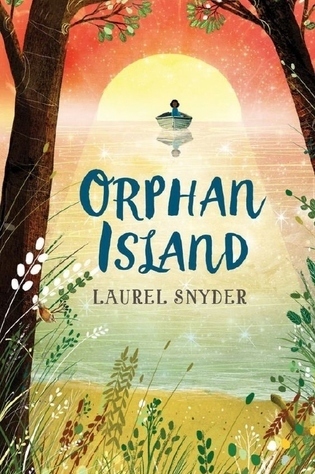 Orphan Island is a Coming of Age Fantasy Novel by Laurel Snyder.

Out in the sea, there is an island surrounded by fog. On this island, there live nine children, each one a year older than the other. To these kids, this island is paradise. The kids are entirely self-sufficient, they can do whatever they want, eat whatever they like, and have not a single care in the world. Plus, there are no changes made that effect their happiness.

Once every year, a small green boat arrives on the island, bringing with it a small child to live there. Things is, there can only be nine children at a time on the island. There's even a poem about it.

"Nine on an island, orphans all,
Any more, the sky might fall."

So whenever the boat drops off a new kid, the oldest kid needs to get on the boat and leave the island for good. And the last person to leave was Deen, so now, Jinny is the new Elder of the island. So now, Jinny has to make sure the new arrival, Ess, learns all she needs to to look after herself, and that Ben, the next in line to be Elder, knows all he has to for when Jinny's time to leave comes in a year.