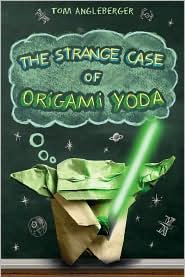 Origami Yoda is a series of books by author Tom Angleberger based around the Star Wars franchise.
Advertisement:

It follows a child named Dwight Tharp, a social outcast at McQuarrie Middle School, who one day makes a Yoda finger puppet named "Origami Yoda". After Dwight uses Origami Yoda to give sound advice to help the other students. This leads another student named Tommy to create a "case file" to investigate whether Origami Yoda is actually real and channeling the Force to give advice, or if he's just a hoax perpetrated by Dwight Tharp.

The first book within the series is The Strange Case of Origami Yoda. It was followed by a sequel a year later titled Darth Paper Strikes Back, which sees another student named Harvey creating an evil finger puppet of Darth Vader to counter Dwight and Origami Yoda. Those books would be followed by Secret of the Fortune Wookiee, The Surprise Attack of Jabba the Puppet, Princess Lablemaker to the Rescue!, and Emperor Pickletine Rides the Bus (all in chronological order). The usage of the scenarios and characters of the Star Wars franchise within the novels was officially granted by LucasFilm.

Sara: Does Edu-Fun sell everything?