Music / Ship Arriving Too Late to Save a Drowning Witch 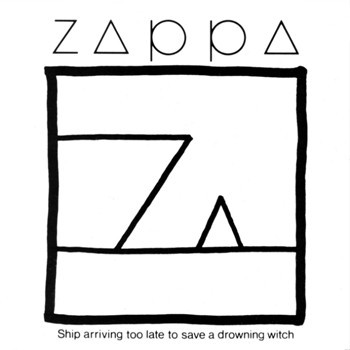 Grody to the max!
Advertisement:

Ship Arriving Too Late to Save a Drowning Witch is a 1982 album by Frank Zappa. It is best remembered for "Valley Girl", a satirical novelty single featuring by Zappa's then 14-year old daughter Moon Unit, targeting a specific kind of girls who live in the San Fernando Valley in California and who speak a specific "slang". Unexpectedly it became Zappa's biggest hit in the USA, reaching #32 on the Hot 100 - his only Top 40 placement - and even becoming a pop culture phenomenon that inspired a lot of merchandising sold by and bought by people who clearly didn't get the joke. As a result "Valley Girl" became a Black Sheep Hit for Zappa, atypical of his usual eclectic music, and inspiring the kind of sociological trends he actually hated. He never performed it live either.

Apart from "Valley Girl" is generally not regarded as one of Zappa's more memorable albums, though "No Not Now" and "Drowning Witch" are fan favorites.

The album cover is a droodle cartoon by Roger Price. Zappa got permission to use his original picture.

Barf Out! Trope Me With A Spoon!