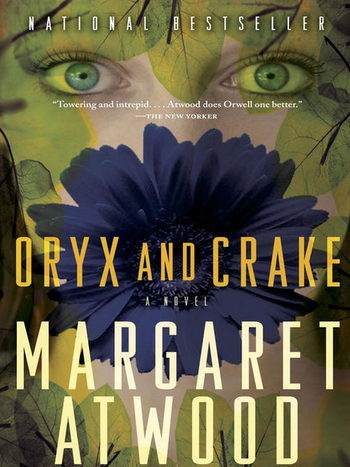 Oryx and Crake is a 2003 novel by Margaret Atwood.
Advertisement:

"Snowman" is a storyteller and teacher of lore to a new species of sapient beings. He has reason to believe he is the last of the old human beings; humanity and its civilization has been wiped out in a plague.

This novel alternates between Flashbacks and "present-day." In the flashbacks, he tells about growing up and living with his best friend. They are privileged, living in a walled compound run by drug companies. Genetic engineering is very common in society; they engineer super-pigs to better model human diseases, for instance. His best friend becomes very interested in biology and genetic engineering; he eventually takes on the nickname "Crake" when the pair start playing the game "Extinctathon." (Our protagonist is no good at it, as there are many extinct species and most of them are not big, cute, or prominent. Crake becomes an expert.)

In the present, something goes horribly wrong in a foraging mission, and Snowman has to go to one of the now-ruined and abandoned complexes for shelter - specifically, the one he used to live in. The two storylines do converge.

A sequel, The Year of the Flood (2009), has been published; rather than continuing the plot, it details what other characters are/were doing during the events of the first novel. The third and final book in the trilogy, MaddAddam (also the title of the trilogy itself) was released in 2013.

Tropes used in Oryx and Crake: