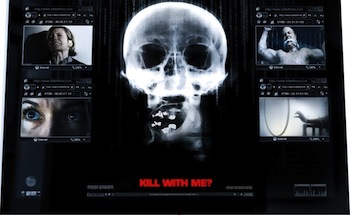 Can't wait to see the analytics for this site.
Advertisement:

A killer kidnaps a victim, imprisons them and then webcasts their murder onto the Internet. Sometimes the victim's fate is linked to number of hits the website receives: either the victim will be killed when a certain number of hits are achieved, or the more hits received, the faster they die.

An example of New Media Are Evil. Compare Snuff Film.

Nothing to do with trying to kill anyone from 30 Rock. Or with a form of Murder, Inc. that lets you hire a hitman online.

And to save the morbidly curious some time, murder.com

is a site for fans of murder mystery books and games.