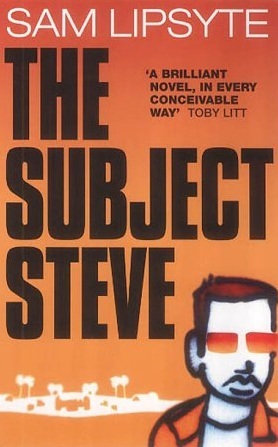 "You see our problem," said the Philosopher. "Who's going to grant us the time, the money, the facilities to research a cure for a nameless ailment from which one person presently suffers? What are we going to do, mount gala events to raise funds for the Fight to Save Steve from Whatchamacallit? By the way, how's the hooch? The speed gives it a nice bite, right?"
"My name's not Steve."
"No, but my point stands."
Advertisement:
"I'm Steve" I said. "Provisionally, I'm Steve, and I'm dying of something. Nobody knows what it is, but it's killing me. I don't want to die. That's about it. Thanks."
The bad news was bad. I was dying. I was dying of something no one had ever died of before. I was dying of something absolutely, fantastically new.

FAQ #28
Could one describe The Subject Steve?
The book was written in the year 2002, and was the second book written by its author. The author's name was Sam Lipsyte. It probably still is. The name of the protagonist may be Steve. The book is best described as experimental, cynical and somewhat nihilist, assuming that the book is best described. Reading the book may leave you with mixed feelings of satisfaction and disillusionment. It may also leave you dissatisfied, indifferent, in fine fettle or fuckeroo'd. And I sure as hell am not going to lay a moral trip on you. Oh, i know, morality is so important these days. Our society, it's fracturing and fissuring and fragmenting and all the other f-words, too, all because of a lack of moral structure. Well, not on this mountain, people. You want slave morality, that's the next mountain over. This is Mount Redemption. This is my fucking mountain. Got it? Good. So, let's get back to our regularly scheduled parable.