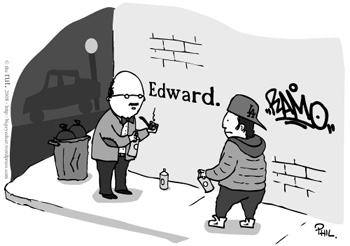 Yes, well, legibility and correct punctuation might not be "street"... but that's how I roll, motherfucker.
Image by Phil Selby

. Used with permission.
Dresden: You just used "obviate" and "ain't" in the same sentence.
Carmichael: I got me one o' them word-a-day calendars.
— The Dresden Files, Ghost Story
Advertisement:

Language is linear. Use and context establish tone, with an expectation for its continuation. When one suddenly uses a register, dialect, or vocabulary at a significant distance from that previously employed, the effect is weird.

There's a certain humor in playing with different levels of language use, and the common trick is to mix "sophisticated" language (such as Spock Speak, Antiquated Linguistics, Sesquipedalian Loquaciousness, Gratuitous Foreign Language, or extremely formal Received Pronunciation British) with "unsophisticated" language (such as the Cluster F-Bomb, Totally Radical, or Buffy Speak), with the necessary awkwardness on both sides. Common examples include:

Compare Buffy Speak, Jive Turkey, Delusions of Eloquence, Bread, Eggs, Milk, Squick. Textbook Humor is often of this type. Not to be mistaken by name for Wicked Cultured. Precision F-Strike is a subtrope. With Due Respect is a common way of getting to this trope. See also Foreign Cuss Word.

Contrast with Expospeak Gag, where a slangy phrase is disguised in excessively formal language (although they can overlap if the speaker then "clarifies" what they were saying, probably while raising an eyebrow).

open/close all folders
Advertising
Anime & Manga
Comedy
Comic Books
Comic Strips
Fan Works
Vocabulary? Vocabulary? Alright, you son of a syphilitic whore. Your mother probably abandoned you at both to suckle murder-pus from the teats of a cantankerous murder demon, who herself must have committed suicide for allowing such a foul being to besmirch her body. To compare you to the lowest, meanest bacterium living on this planet would be an insult to that bacterium: Had it a voice, it would call you a putrid, pitiable piece of putrescence and leave you to fester in a ditch. The ditch would reject you, for the ditch was dug out, by human hands, for a purpose, you useless sack of excrement. Kill yourself with a rock, and leave instructions for it to be cleansed of your taint. I would call you a failure, but you knew that already, didn't you? Your plans were shattered by a bunch of teenagers! And this is one last, pathetic grasp at godhood? You're going to fail. You want me to spell it out? You've got nothing left. The world hates you. You who would merge humanity into one: What power do you have against four billion voices? So go die in a fire, you stupid little fucker!
Films — Animated
Films — Live-Action
Music
Podcasts
Roleplay
Theatre
Textbooks
Video Games
Web Animation
Webcomics
Web Original
Web Video
Western Animation
Other
Feedback