Film / How the West Was Won 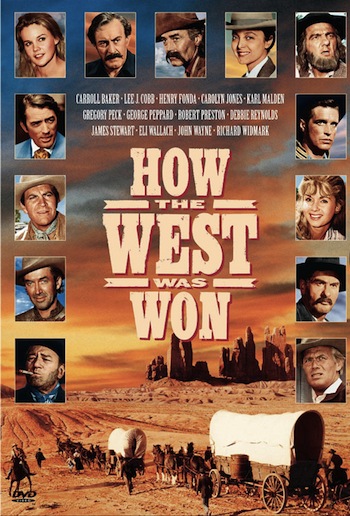 "Stride by stride—they tamed the savage prairie land
Nothing stopped them—no wind nor rain nor sun!
Side by side—these pioneers from every land:
All pulled together—That's how...the West was won!!!"
Advertisement:

How the West Was Won is a 1962 epic Western film by Metro-Goldwyn-Mayer. The last major feature filmed in the classic three-strip Cinerama widescreen format, it tells the story of the westward-bound Prescott family through four generations and many events in American history. Famously, the cast boasts more than twenty big-name stars of the era, including Jimmy Stewart, Debbie Reynolds, Gregory Peck, George Peppard, John Wayne, Henry Fonda, and Eli Wallach. In fact, there were probably more big-name stars with major roles in this film than any other in the history of Hollywood. The film also had three directors, although one of them, Henry Hathaway, helmed three of the five stories; the other two were John Ford and George Marshall. The epic music score, by Alfred Newman, is also pretty famous.

There was a television show loosely based on the movie in the late '70s. Moderately successful in America, but a huge hit in Europe, where it's still well-known.