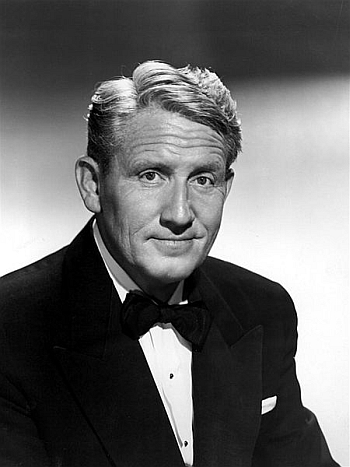 Spencer Tracy in 1948.
"Acting is not an important job in the scheme of things. Plumbing is."
Advertisement:

Spencer Bonaventure Tracy (April 5, 1900 – June 10, 1967) was an American actor from Milwaukee, Wisconsin. Respected for his natural style and versatility, Tracy was one of the major stars of The Golden Age of Hollywood. In a screen career that spanned 37 years and 75 films, he was nominated for nine Academy Awards for Best Actor and won two, sharing the record for nominations in this category with Laurence Olivier. In 1999, the American Film Institute ranked him as one of its top ten Hollywood legends.

Tracy, a notable casanova, famously maintained a 26-year extramarital relationship with Katharine Hepburn, his twin soul on and off the screen; they appeared together in nine movies. Though Tracy was estranged from his wife even before meeting Hepburn and never returned to live in the family home, he nonetheless wished to conceal his relationship with Hepburn from her (and as a devout Catholic, he would never divorce her), while the MGM moguls were careful to protect their big contract stars from controversy, so the true nature of the Tracy-Hepburn relationship was hidden from the public despite being an Open Secret in Hollywood. The couple did not live together until the final years of Tracy's life.

Spencer Tracy was often cited by his contemporaries as the one of the best actors in films. Tracy portrays characters with on-screen style, seamless naturalism and subtle inflections, he simply is the man he is playing. In an era when movie stars found their niches and repeated their popular roles with only minor changes, Tracy ranged from sportswriter, convict or patriarch to war hero, fisherman, judge or priest. He could be hilarious in comedy, frightening in anger or tender in love scenes. His seemingly effortless approach earned him the respect of his peers, helping him to become one of the most distinguished and venerated actors of his generation.

Alas, Tracy was also a notorious drunk, to the point where the studio kept an ambulance on standby to whisk him out of sight when he was on a bender. That heavy drinking also had a likely effect on his appearance, making him look older than he actually was. In addition, for all his relationship with Hepburn, Tracy was openly verbally abusive with her, with continual insults and criticism of her and her work.

Tracy died of a heart attack in 1967, just two weeks after the completion of Guess Who's Coming to Dinner. His requiem drew an unprecedented number of stars, and active pallbearers included George Cukor, Stanley Kramer, Frank Sinatra, James Stewart and John Ford.