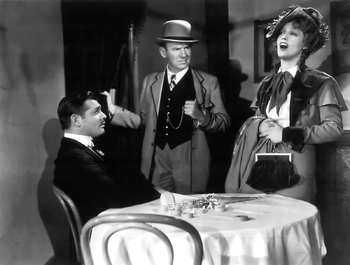 It is set in Des Moines, Iowa—no, just kidding, San Francisco—in the months immediately before the 1906 earthquake.

Blackie Norton (Gable) is a saloon keeper on the Barbary Coast

, then the main Red Light District of the city. On New Year's Day, 1906, into his saloon wanders Mary Blake (MacDonald), a new arrival to the city and would-be opera singer who has failed to find a job and is desperate for any employment, and whose residence has just burned down. Blackie hires her for $75 a week as a dance hall singer. Initially, Mary resists Blackie's crude sexual advances, but soon they fall in love.

Meanwhile, Blackie has been recruited by fellow Barbary Coast saloon owners to run for the San Francisco Board of Supervisors on a platform of improving the fire codes and safety standards of buildings on the Coast, spurred on by the fire that destroyed Mary's building. In this, he is opposed by Jack Burley, a Nob Hill aristocrat and Barbary Coast slumlord who doesn't want to pay to upgrade his properties. Burley is also fighting Jack for Mary, both professionally—he is a patron of the San Francisco Opera and wants Mary to sing there—and personally, as he wants Mary to be his wife. Blackie for his part wants Mary all to himself. Blackie's old friend Tim Mullin (Tracy), now a Roman Catholic priest who works in a Barbary Coast mission, is also against his relationship with Mary, believing her to be too fine and noble to be a dance hall girl and a saloon keeper's lover.

All of these plot elements are short-circuited when the whole city is destroyed on April 18, 1906.

The only film to pair fellow MGM stars Gable and MacDonald, partly because Gable couldn't sing, and partly because they loathed each other. note It took over twenty years to them to make up. (Legend has it that Gable deliberately ate a spaghetti lunch loaded up with garlic before filming a kissing scene with MacDonald, to make his breath particularly bad.) The song "San Francisco," composed for this film and performed several times, has become an iconic theme tune of the city.

Apparently, D. W. Griffith, who had not directed a movie in five years and in fact would never direct another film, was visiting the set one day, leading his old friend and former protege Woody Van Dyke to let him direct the earthquake scenes.

Tropes in San Francisco include: