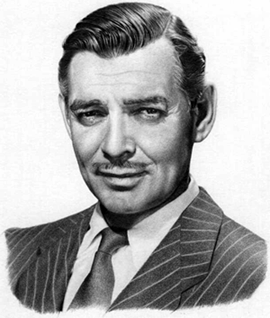 "I'm no actor and I never have been. What people see on the screen is me."
Advertisement:

William Clark Gable (February 1, 1901 – November 16, 1960) was an American actor in The Golden Age of Hollywood. His three most famous roles are Peter Warne in It Happened One Night, Fletcher Christian in Mutiny on the Bounty and Rhett Butler in Gone with the Wind; all three earned him Academy Award nominations, and he won for It Happened One Night. He was named the seventh greatest actor in American history in a poll by the American Film Institute.

At one point he was Hollywood's top male box-office draw, second overall only to Shirley Temple. He was nicknamed "The King of Hollywood". Joe Shuster named Superman's alter-ego after Gable and fellow leading man Kent Taylor.

Ironically, for all the confident leading men roles he played on screen, Gable was noted in private to be somewhat shy and insecure; he outright abhorred unplanned public speaking, often relying on his much more confident long-term girlfriend and later wife, actress Carole Lombard, to guide him through red-carpet appearances. Lombard's sudden death in a plane crash in 1942 is noted as the event that took much of the wind out of Gable for the later part of his career, and left him in a depressive funk for years, during which he enlisted in the U.S. Army to join the war effort in Europe and took a three-year absence from the screen. And even though he later returned to acting, and even remarried twice (to actress Sylvia Ashley in 1949 and actress Kay Williams in 1955), many of his friends and colleagues noticed how the loss of Lombard always hung over him like a shadow for the rest of his life.

Gable eventually passed away from a heart attack in late 1960. His last appearence on film, The Misfits, posthumously released in 1961, would also be Marilyn Monroe's last completed film.

According to rumor, Gable (unintentionally) made one other lasting imprint on pop culture: There's a scene in It Happened One Night where his character is talking while chewing on a carrot. The Looney Tunes creators, being fans of the film, affectionately parodied this trait in the character of Bugs Bunny, for whom it quickly became a trademark.