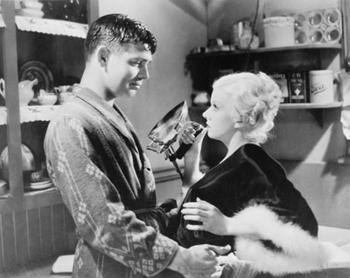 Hold Your Man is a 1933 drama film from The Pre-Code Era, directed Sam Wood and starring Clark Gable and Jean Harlow.

Eddie Hall (Gable) is a small-time crook. When a scam to relieve a mark of $30 winds up getting Eddie chased by the cops, he dashes into an apartment building and flings himself into a random unlocked door, which happens to be that of Ruby Adams (Harlow). Ruby, who is something of a hustler herself, lets him hide. Sparks fly—it's Gable and Harlow!—Eddie and Ruby fall in love, and soon she's joining him in his con jobs. However, an unexpected tragedy changes things for the both of them.

The third of six films that Harlow made with Gable before her untimely death at the age of 26 ended their screen partnership.